Poland. Design from a smaller city.  Between design,

art and business, or what happens outside

The exhibition of design and artistic objects “Kreatywni. Operatywni. Ludzie z energią. Przedmioty z duszą” [“Creative. Entrepreneurs. People with Energy. Objects with Soul”] could be described as a creative energy and an artistic mosaic. The fruits of the initiative are presented in the foyer of the Municipal Cultural Centre – Power Giants in Bełchatów. The impressive crowd that attended the vernissage on April 7 proves that design is popular also in smaller cities.

The exhibition consists of furniture pieces, lamps, mirrors, artistic ceramics, graphics and photographs, fabrics, decorative plasters, and bicycle gadgets. All of them have been made by artists from the Bełchatów area. There are original, applied and art objects made in short series, as well as unique objects available in single copies. The exhibition is devoted to “Creative Entrepreneurs” – designers, artists, and entrepreneurs whose creative actions reflect on the role of the object in everyday life, and explore the relationship between space, object, structure, and material.

Thanks to social media such as Instagram and Facebook, one can take a peek into art studios around the world. The Internet is filled with beautiful objects of everyday use. The flood of information and stylized photographs of objects bring about a situation, in which we have less and less time and possibility to become interested in the work of Polish designers, artists, and craftsmen. The situation is certainly easier for people living in large urban centers, where design fairs and festivals are held, for example: Łódź Design Festival, Gdynia Design Days, Targi Rzeczy Ładnych [A Fair of Nice Things], 4 Design Days, or Warsaw Home. In smaller Polish cities it is more difficult to participate in such events. And yet, designers, artists, and craftsmen work everywhere. Frequently, people don’t know what their neighbors really do until the author pulls his/her products out of the cabinet, drawers, and corners of their own studios. In the case of Bełchatów, the exhibition “Creative. Entrepreneurs. People with Energy. Objects with Soul” is such an opportunity. The event opened with a vernissage on April 7 and will last until April 28, 2019. The event is organized by the City Hall in Bełchatów, under the patronage of the Mayor of the city of Bełchatów.

We are not the only ones…

It all started with a bottom-up initiative organized by the creators and entrepreneurs. They met in December 2018 at the exhibition “Gwiazdka z Designem” [“Christmas with Design”] organized by the designer and founder of the company “Wnętrza” [“Interiors”] – Alicja Galewska. A month earlier, her collection of furniture, lamps, and mirrors was unveiled for the first time at the Cocoon fair in Brussels. The December exhibition organized in the home décor salon already featured the works of several designers from the Bełchatów area. After the event, more artists appeared with their products. On behalf of the city hall, Ewelina Karlińska-Wejder took over the organizational aspect of this artistic energy. Thanks to her, the bottom-up initiative was successfully transformed into an exhibition held at the heart of Bełchatów.

Alicja Galewska has designed a modular, multifunctional Bondi bench that can also be used as a coffee table. The basic idea is that two basic elements create a puzzle that can be arranged into various shapes, including circle, line and hexagon. When additional elements are used, individual arrangements may never end. The shape of the bench was developed as a result of cutting the rectangle at an angle into two identical parts. Although the idea is simple, it is one of the hardest to come by. It’s a geometric puzzle with many answers. Thanks to the carefully developed solution, the furniture, and its multiplications easily adapt to the interior. Alicja Galewska carefully selected the materials used to manufacture the object. Bondi bench is made of oak and powder coated metal. The exhibition also presents a puff with an asymmetrical undercut, consisting of two independent parts. They may be used separately or together as a set. An important part of the collection designed by Galewska is a series of CUT-OUT lamps. These are cubic-shaped objects with light penetrating the room through metal openwork. The project was inspired by the works of art from Asia, Oceania and both Americas. The designer saw them at the Quai Branly Museum in Paris. The enigmatic beauty of objects from distant parts of the world has prompted Galewska to draw her own symbols that do not exist in any language. These signs cannot be decoded, similarly to works of art from a foreign cultural context that are not fully understandable by viewers. As a result, a simplified, modern non-obvious model was developed. Exotic inspiration has been transformed into a cut-out – a form well-known in Polish folk art. The collection is completed by mirrors on suspenders – leather straps fastened with screws to metal frames. In this case, the designer wanted to emphasize the contrast between emptiness and fullness. The design is created not only by materials, but also by the empty space between them. 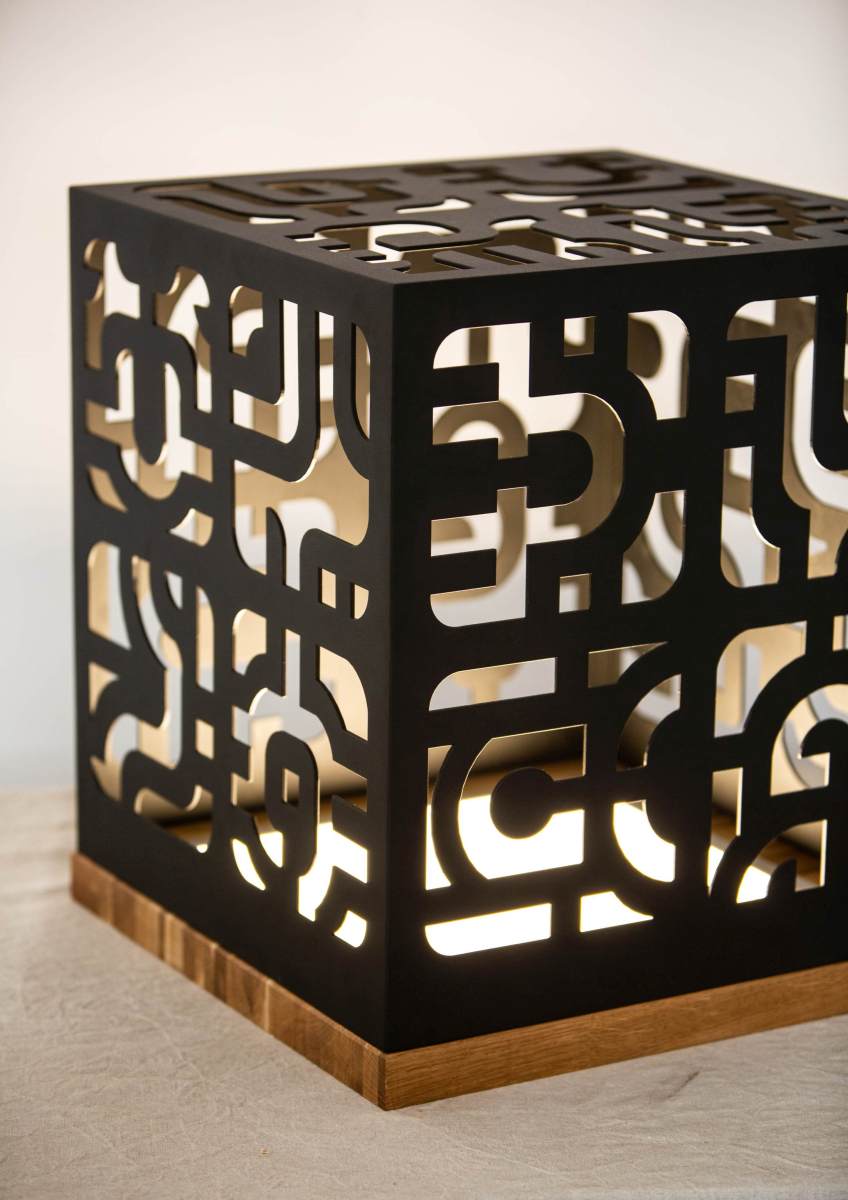 Cut Out seat by Alicja Galewska

From digital designs to everyday objects

PH Studio is a studio headed by Patryk Habryn – a graphic designer who has been developing logos, films and commercials for global brands for several years. However, the exhibition in Bełchatów does not present digital projects but furniture pieces created in cooperation with Robert Kuśmierek from Kristal. Creative approach is expressed in a new, but stylistically mature brand – PRAD. Habryn and Kuśmierek combine wood, steel, ceramics and glass in a single object. Each piece of furniture has a stamped signature made with the precision of a jewellery maker. In addition to furniture, the exhibition presents eco-leather and wood bags, handmade toys and lamps. This, in turn, is the result of the cooperation with his Habryn’s partner, Dorota  as part of the TAKIE TAM initiative.

She does not describe herself as an artist, but as a person who loves to work with children and wants to make stained glass. However, Beata Bartosiak definitely is a skilful artist. This is known to her students, to whom she has been devoting a lot of her time for many years in the form of unusual art classes. During her workshops, Bartosiak’s students create graphics using chisels and linoleums, compose mosaics, learn the stained glass techniques, paint fabrics, and even design publications that later participate in the competition entitled “Książka obiekt artystyczny” [“Book, an artistic object”]. However, this time the exhibition did not show her pupils’ works but unique objects designed and made in single copies by Beata Bartosiak in BABE ART STUDIO – stained glass, lampshades and lamps.

The artistic ceramics presented at the exhibition was made by Alicja Przydryga and Ewa Ber. The former has been running her studio for over twenty years, in which she teaches residents of Bełchatów how to work with clay and enamel. At the same time, she creates serving plates, bowls, ceramic objects and jewellery. Przydryga emphasizes that she is inspired by the material and by the moment in which she begins to work. She searches for new forms of expression by experimenting with structures and textures. Przydryga and Ber cooperate with each other in Zbychewka – an art studio and a house in one, founded by Ewa Ber and her partner Zbych. Zbychewka holds a furnace for firing of the ceramics and a workshop where Zbyszek builds bikes adapted to the needs of people with disabilities. 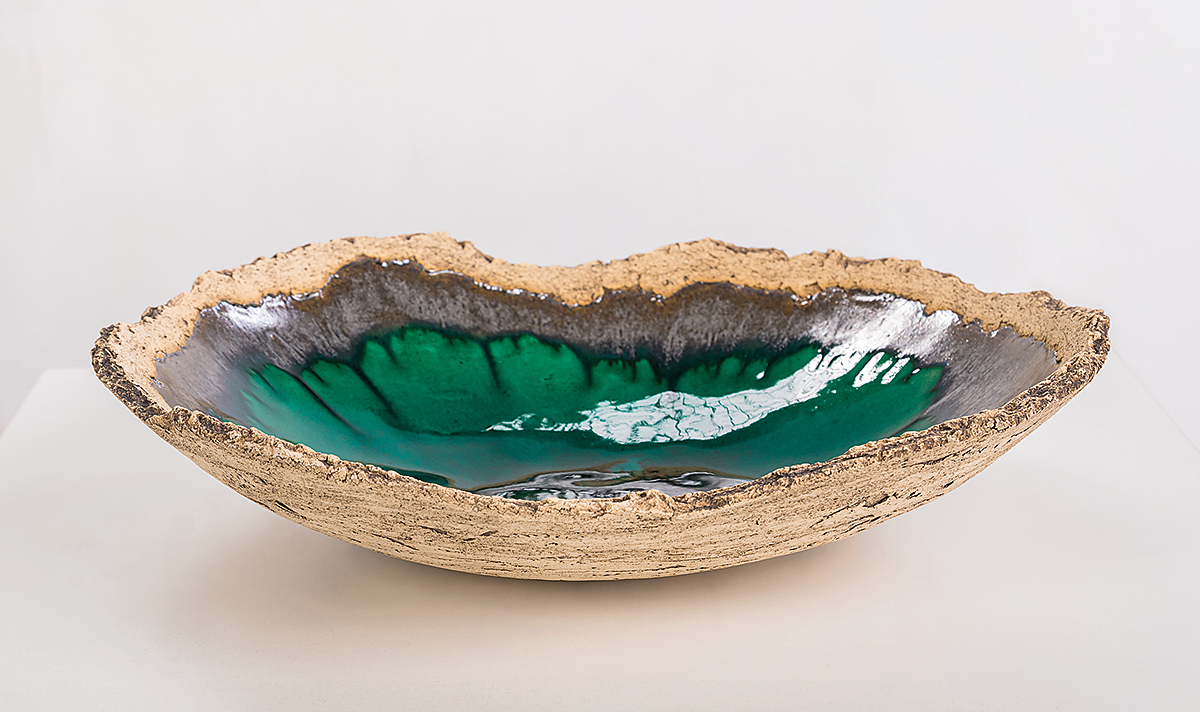 Graphics and photography from JAKA STUDIO

Katarzyna Forusińska-Pytka, graphic designer and photographer, developed the visuals, the logotype project and the exhibition catalogue. The exhibition presents portrait photos taken by her. Man occupies a special place in Forusińska-Pytka work. She finds an endless source of inspiration in the consolidation of his/her appearance and personality. Her work is inspired by the view of the photographer Don McCullin. He believes that photography is not related with looking, but with feeling. “If you can’t feel what you’re looking at, then you’re never going to get others to feel anything when they look at your picture”.

The material in the foreground – decorative plasters, fabrics and glass in interior design

For Ewa Szwemberg-Urbańska Ilona Bajurska and Zuzanna Szubert, everyday work is more than business. Szwemberg-Urbańska makes decorative plaster and runs her own company EVART. She uses them not only on the walls, but also experiments with the material using it to finish countertops, furniture pieces and smaller items. Bajurska develops her family business Skalar devoted to the production of glassware. She works with designers. The exhibition features the Bungee mirror and the CUT-OUT mirror made in cooperation with Alicja Galewska, and the Luxor mirror – Bajurska’s original design. Szubert and her husband Krzysztof head Studio Dekoracji Okien Finestria and work with fabrics that create a background for interior design. 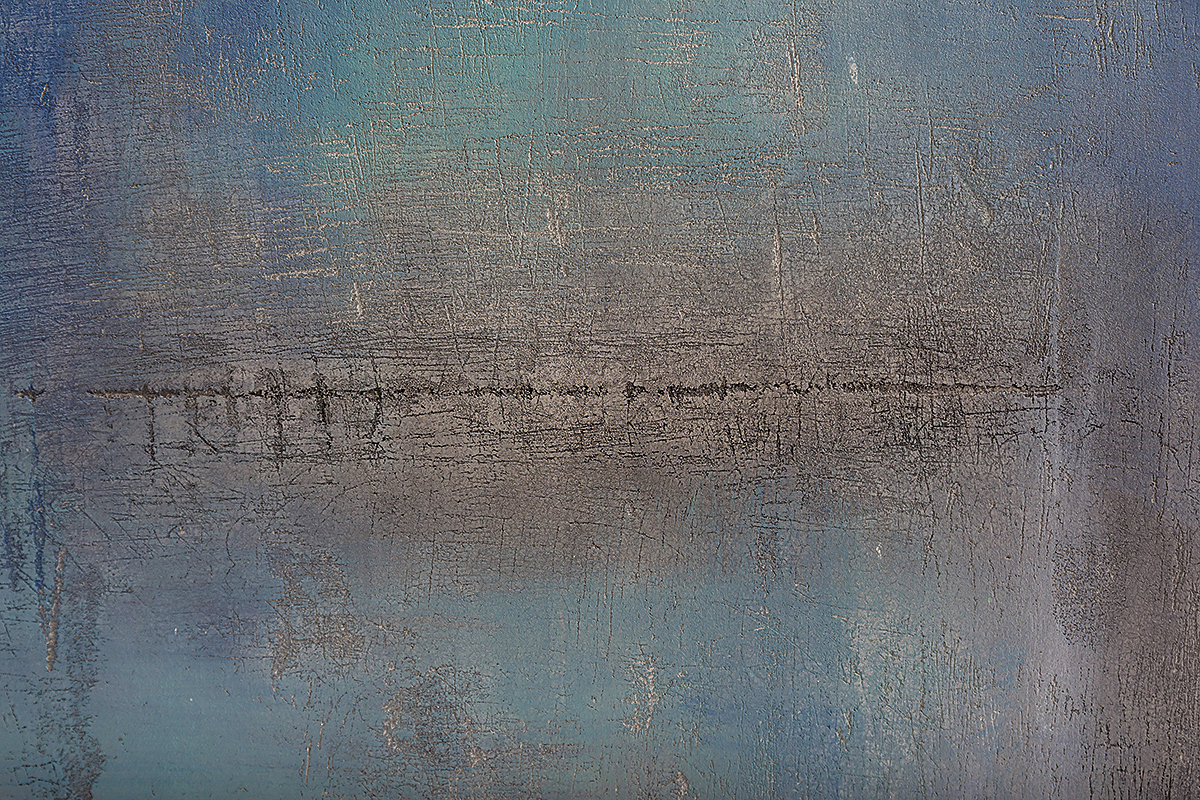 The exhibition “Creative. Entrepreneurs. People with Energy. Objects with Soul” takes place in the foyer of the Municipal Cultural Centre “Power Giants” in Bełchatów. The exhibition will be open until April 28, 2019.